Disney is bring Mickey Mouse back in a new series of 19 cartoon shorts. This iconic mouse first appeared in 1928 in “Steamboat Willie” which was only seen in 3 clips since 1980. Disney Channel will air the new shorts starting on June 28, 2013. The new shorts show Mickey in various humorous situations that show his rascality and pluck. 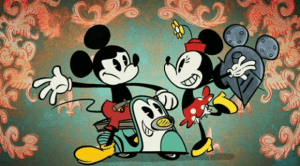 But it also showcases the beloved charm of Mickey and his good heartedness. Each of the shorts are featured in various contemporary settings including New York, Tokyo, Santa Monica, Paris, Venice, Beijing, and the Alps. The shorts also feature the genuine heartfelt moments Mickey explores and he experiences this life with his partners: Goofy, Donald Duck, Pluto, Daisy Duck, and of course, Minnie Mouse. Paul Rudish is the executive producer and director for these shorts. The short are targeted for kids and families, and it will include a few surprises for Disney fans. These animated shorts are produced in 2D and will mimic the designs of the cartoons of the Disney works in the 1930s but with a few contemporary touches. The cartoons will have the similar “rubber-hose” cartoon style and the backgrounds will have the graphic design sense of the 1950s and 60s of Disney cartoons.