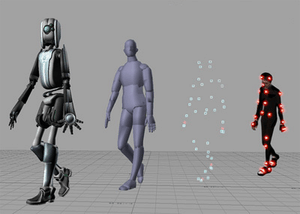 History of 3D Animation Industry – Animation, in its earliest forms, is made for the entertainment of the youth. Cartoons, for a very long time, considers programs for children. However, as the industry has grown and progressed, animation has begun to reach and wide range of audiences and demographics.

The animation industry has seen many changes. It has gone from hand-drawn, frame-by- frame animation, to digital and the expansive possibilities that come along with that. History of 3D Animation Industry – In the quest for realism in the digital realm, realistic motion is a challenge for any artist to capture and duplicate. One of the leading methods of this is Motion Capture, or MoCap. This technology is revolutionary for adding realism to digital animation.

Motion Capture often make in means of an actor wearing a number of sensors, which places on key points of their bodies. Then they make the physical movement called for. This procedure is records in a computer. Then used to animate a digital character. MoCap has many applications aside from the film and entertainment industry. This cutting edge technology is also useful in the realms of robotics, military training, sports, and the medical field, to name a few.

The history of 3D Animation

The history of 3D Animation goes back to the beginning of the 1900’s. Some of the first silent films had in-camera effects to enhance the look and appeal of these stories. As time marched on, actors and directors got more daring. They tried more elaborate stunts to keep audiences on the edge of their seats. Eventually, a director figured out a process taking in-camera effects to the next level. They manipulate the film exposure and make various effects to create the motion that shows even though they are not shot in reality.

Fast-forward 50 years, the ease of purchasing laptops and computing power accelerated majorly. This technology boom made it easier for small studios to do the work of previously only large brick and mortar companies like Pixar. With enough small business pressure. Eventually, only a handful of large brick and-mortar companies survived and the rise of the small independent 3D Animation Studio rose.

Looking for a 3D Animation Company to produce your next project? Consider AustinVisuals.com contact us at [email protected] or call/text us at 512-591-8024 or contact us!