How To Write Pictures – Save $ On Animation And Video Production Among the first questions we ask customers who want animated or live videos to promote, persuade, sell, explain, or extend brand identity for their products and services is, “Do you have a script.”

It’s critically important to have a script because animation, live video, motion graphics, and all the other magical rabbits Austin Visuals pulls out of a hat are timed to either narration or action in the visual story our customers want to tell. Forget the “old saying”, and remember this: WORDS CREATE A THOUSAND PICTURES.

Script writing is my favorite thing to do and I don’t mind admitting it. Whether I’m helping to clarify or revise a customer’s script to enhance it or modify visuals so it’s even more affordable than our normal value prices, or writing it from the beginning – it’s the best part of the day.

At Austin Visuals, not having a script won’t be a barrier to creating something that can benefit your business or service because we’ll help you, If you prefer to do it yourself, hopefully what I’m going to share will provide useful information.

How I Learned
My very first job while still in college was at a TV station working for Irv Shoemaker who was well known for his previous career with Bob Clampett writing, producing, and voicing “Cecil the Seasick Sea Serpent” – one of the first nationally televised children’s shows.

At 5’2”, Irv was a character in himself (literally since Clampett created a character in the show that looked like Irv). This snip will have to suffice as Irv’s image, since I haven’t any photos of him. Neither does Google. Irv was happiest behind the camera, still, that makes me sad. Irv was a twinkling inexhaustible force who was part visionary, part demanding autocrat, slightly daft creative genius, and a tremendously generous teacher.  It took to some time to appreciate the teaching part. The first thing he did was tear up everything I wrote based on what I was learning at Iowa’s vaunted Writers Workshop.

“This is television. You’ve got to see pictures as you write,” he’d say. “This isn’t an intimate relationship with a book someone is going to spend hours reading, this is a public display of affection or affliction or affirmation in thirty or sixty seconds.” He’d tear my stuff up, I’d tear all up, but I caught on.

All the Beany cartoons he wrote had a “moral” or lesson in it, and Irv taught me the importance of that part of visual storytelling too.

Today, when Austin Visuals does video animation for corporate clients,
we are more likely to identify that moral of the story as the
CTA or “call to action,”
but it’s two sides of the same coin. It all comes down to
“what do you want the viewer or customer to know, think, believe or do after they watch.”

Since Irv, I’ve been fortunate to have many mentors for writing scripts, ads, clinical education, and speeches in advertising, public relations, medical and political arenas. Most of the time it comes down to telling and showing a persuasive story in a compelling way – seeing pictures as I write.

Here’s what I’ve learned about doing it:

Be sure you know who you’re talking to. The ultimate customer is the most important person to focus your creative energies on. What kind of tone will they respond to? Can you use humor? Pathos? Do you have to motivate them by instilling a little fear? Competition? What is their need and how are they satisfying that need now (before buying what you’re selling.)? Use demographics, psychographics, market research, the magical internet, but most important of all, talk to the people who might potentially buy what you’ve been hired to sell.

Get to know the product. Once you know the customer, it’s going to be easier to talk about the competitive advantages the product has that are important to them using the rule it’s not what you want to sell that matters, the focus must be on what people want to buy.

Step 2 – Be realistic about the budget

You may not need Pixar quality or Disney or Austin Visuals photo realistic 3D animation – 2D or Motion Graphics or Live Video or a mixture of some or all of those to tell stories effectively. We’re always available to consult with you about what is possible at almost any range of investment.

Step 3 – Use this format to develop your script

If you’ve Googled “how to write a script”, you’ve very likely seen something that looks like this:

A lot of the pertinent information is available in that format, but we don’t know how long the scene is meant to be, what the main characters are meant to look like, and it’s difficult to determine what the narration is separate from the action. I’ve developed this format and found it helpful: I’ve taken the example above and put it into the format I use which is a simple table from Google docs. 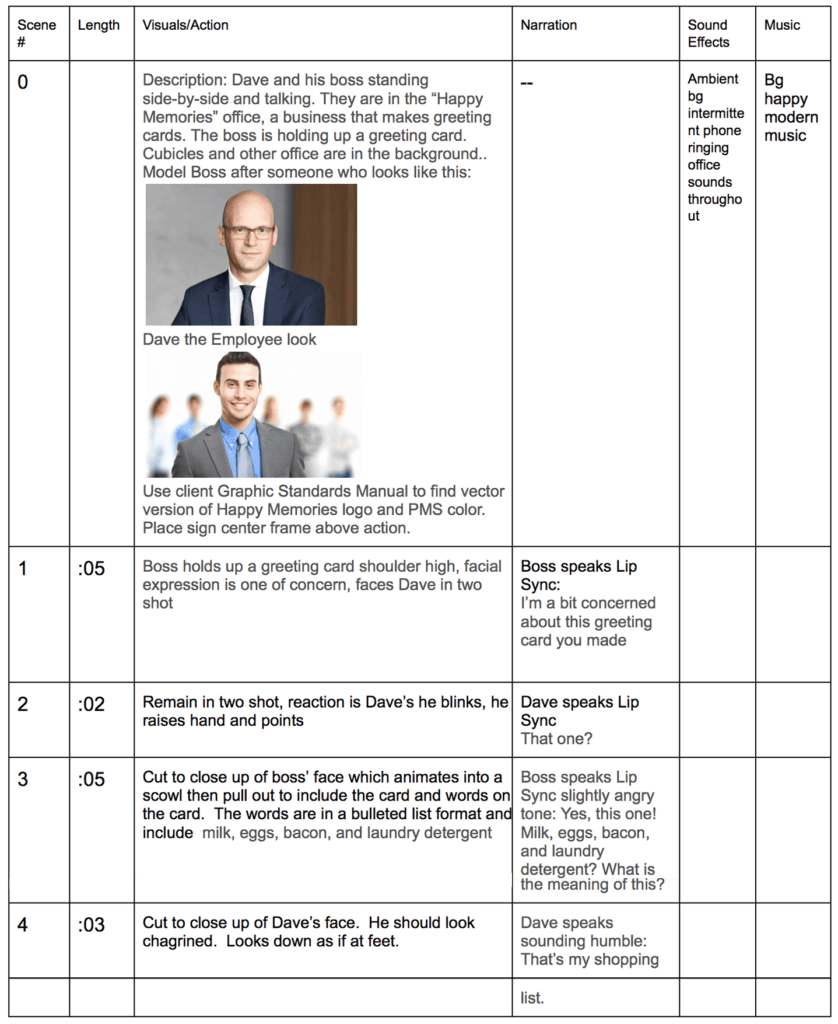 That is a very simplistic example, but you’re smart and you get the idea.

Scripts should be as specific as possible

not to restrict creativity, but to control costs,

because while imagination is unlimited, budgets rarely are.

The best way to demonstrate how we write scripts at Austin Visuals is to let us write one for you, or modify one for you. There are hundreds of other subjective and objective factors that go into writing a real script and I’d enjoy brainstorming them with you.

When we’re producing a video we go

You can learn more about those steps here. Nancy has decades of experience (and winces to read that decades part but it’s true) writing for television, advertising agency clients like Revlon, American Airlines, Paramount Pictures and more, and in developing creative persuasive materials for hospitals, physicians and allied health professionals. Connect with Nancy on LinkedIn or email her directly at [email protected]