How To Animate – Historical VFX Techniques – Behind the Scenes at ILM

How To Animate – Movies have come a long way in its special effects. Today animation companies and studios like ours create beautiful and realistic computer generated effects, but that wasn’t always the case. It took pioneers like Industrial Light and Magic, or ILM, who really furthered the art of visual effects on the big screen. This article will be going behind the scenes to show you the work and tricks behind ILM’s work in some of their earlier movies. 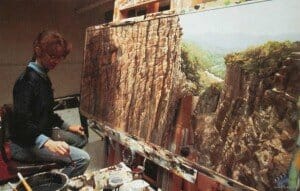 How To Animate – Indiana Jones and the Temple of Doom features quite a few ingenious techniques. One of the more prevalent and common ones was the use of matte paintings and masks to create shots of fantastic locations. Matte painting is the process during which a matte painter paints onto a glass pane. They usually paint environments. They leave deliberate holes in these paintings where the live action filmed portions will be. These paintings are then filmed. The filmed shots, both live action and matte painting leave black spaces or masks to separate out the layers of film. A shot can have multiple masks used to simulate interactions with big environments like someone falling down a cliff. The resulting shot is them composited together with a live action portion which combines the two or more into one clip. Here is a photo of a matte painter working on the cliff scene from the Indiana Jones movie.

Another common technique used by ILM is the use of puppets or miniatures to create shots that wouldn’t be feasible to make in a studio. While the use of miniatures and puppets in film usually bring to mind stop motion films, they are also used to make great special effects. This is most commonly used on shots that show off large amounts of scenery without focusing too much on any of the characters in it. This was very liberally used in the mine cart chase scenes in Indiana Jones and the Temple of Doom. They would edit together live action shots with shots of miniatures to make the clips feel more realistic. Miniatures can be used in films to make environments seem much bigger and grander than a studio set would allow.  You’ve seen this before in movies like Star Wars and Lord of the Rings. Here is an amusing image of one of the miniature sets of Indiana Jones. How To Animate – ILM’s most famous work, Star Wars was unique in that it tackled the enormous task of creating believable space battles. They accomplished this by compositing together many different clips of ships into one battle. They would have to plan out the choreography carefully. They would do this by carefully drawing out silhouettes of the ships movements on both transparent sheets and film in order to plot out the ships’ course. They would then playback these silhouettes to see if the movement of the ships and their paths was something that they wanted. Depending on the scenes these shots could composite up to 170 shots together for just a few seconds of film.

As you can see a lot of work is put into every second of film and sometimes it is not always CGI behind these impressive effects. ILM might be known today for their impressive 3D animation, but while it was not always 3D in the past, it sure was impressive.