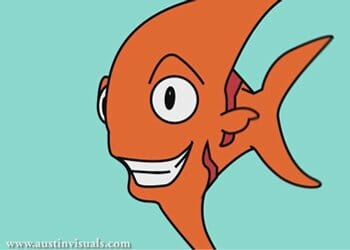 Inside the offices of Powerhouse Animation, artists are working on a dizzying variety of projects.

One is drawing a shield-bashing viking for the upcoming video game “The Banner Saga,” while nearby, another animator is working on a phonics-based learning program for children. 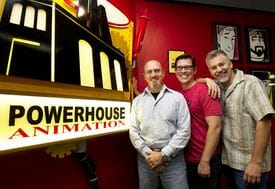 That’s the thing about working for a service company, said CEO Brad Graeber: You have to be able to work on whatever comes through the door.

After more than a decade in Austin, the team at Powerhouse is proudly “2D,” as Graeber puts it, in an era when traditional animation is falling by the wayside in favor of computer-rendered 3D images. 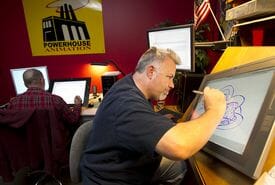 As the studio founders will tell you, animation has changed drastically in the past decade, going from pen and paper to drawing on tablet-like devices. But Powerhouse and a handful of other local animation studios are still contributing to Austin’s identity as a creative hub.

Powerhouse got started in 2001 after Graeber and two other founders – Frank Gabriel and Bruce Tinnin – left their jobs as animators at an educational dot-com that went belly up.

They started with a handful of employees working in mostly feature films. But 2001 was also a low point for 2D animation, with a number of animated movies like “Titan A.E.” bombing and companies like Disney laying off their 2D animators and shipping work overseas.

“It was like we started a 2D animation studio with feature film-quality animators the year that industry died,” Graeber said with a laugh.

Despite the tough times, the studio persevered, eventually growing to more than 30 employees and becoming a preferred vendor for Disney.

It diversified to stay alive. Powerhouse has worked with an extremely wide variety of clients – from a video helping scientists explain the Higgs boson particle, to video games, feature films, shorts for Disney and ESPN, even political campaigns in Australia.

“We’ve always prided ourselves on pleasing the customer, meeting deadlines – it’s always been very important to us,” Tinnin said. “And that’s reflected on what we’re doing now.”

According to the Texas Film Commission, the state has more than 55 animation and visual effects companies. Austin itself has Powerhouse, RadioActive Labs Entertainment, Flat Black Films, Moontower VFX and Spiderwood Studios, to name a few.

The state has also boosted its Texas Moving Image Incentive Program, nearly tripling the budget from $32 million to more than $95 million. And animation projects are now able to receive a 22.5 percent cash grant – up from 17.5 percent, said Stephen Kreher, director of economic development for the Austin Chamber of Commerce.

“There seems to be quite a bit of interest in Austin’s creative community from companies looking for a satellite studio or operation,” he said. “Austin boasts an extremely creative workforce and could easily accommodate a large animation project or company. “

The animation industry statewide is thriving, said Josh Havens, a spokesman for Gov. Rick Perry. Aside from the Austin studios, there are Dallas-based studios Reel FX, Green Grass Studios, and Element X Creative. There are also more than 15 colleges and universities with 2D or 3D animation programs, he said.

“What makes Texas attractive to the industry is their need for a skilled, artistic workforce that has already developed here thanks Texas’ strong video game industry,” Havens said.

Across town, at Austin Visuals 3D Animation Studio, owner and CEO Matthew Winters estimates there are about 30 animation studios in Austin. Winters’ company specializes in engineering and technical animation.

The industry has gotten much more competitive, Winters said, since animating tools that used to cost thousands of dollars are now much more affordable.

“Animation used to be the Wild West, when you could do anything and charge anything,” he said.

Now “you have to be more skilled than your competition.”

Back at Powerhouse, Graeber showed off some of his animators’s work in a studio tour.

One was a German commercial for a yogurt in which children’s heads literally explode when they eat it.

Another was an animation explaining the Texas GEAR UP state grant program. Not the sexiest work, but it pays the bills.